Lacey and her brother Zeb Welborn founded Welborn Media. She has designed and launched websites, several projects, marketing materials, a podcast, a book and more. Her passions include her family, her friends, creating things and helping businesses grow.

One of my duties as President-Elect is to plan and host the Chino Rotary Dinner & Auction.

We are looking for people to sponsor, donate and attend the event. Please let me know ASAP if you’re interested in doing so by replying to this email. 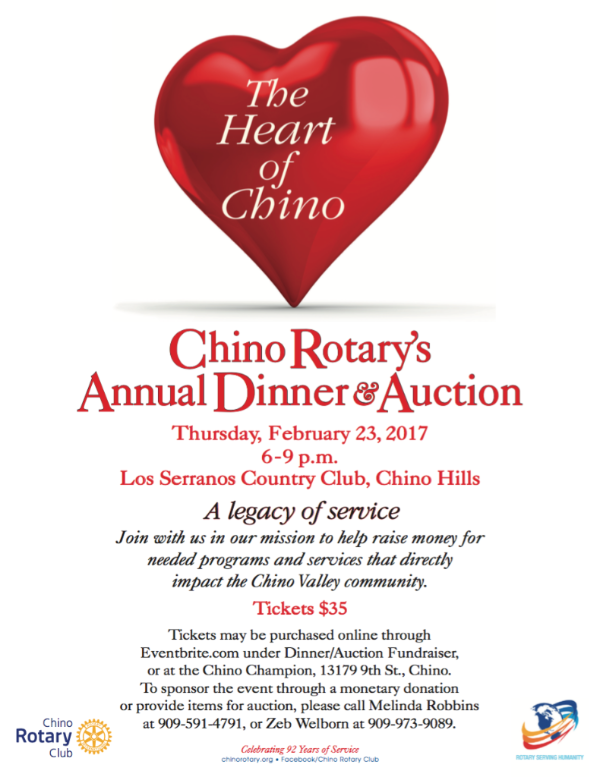 Since February 1925, Rotary has been saving lives both close to home and around the world by tapping into a global network of service clubs dedicated to raise funds and awareness for challenges such as poverty, illiteracy, polio eradication, clean water and sanitation, and malnutrition just to name a few. The Chino Rotary Club is part of that global network that has united many great minds around a shared purpose: “To improve the quality of life in our community.” With a long history of involvement and financial support for local programs, the Chino Rotary Club aims at making 2017 a year to expand their support of community and international projects by hosting an array of fundraisers during the year that will help the club do what it does best, give!

“This year our goal is to raise $30,000 for Youth Leadership Camps, Entrepreneurial Training, Music, Essay and Speech Competitions for our local high school students, food, clothing and childcare for Chino Valley residents in need, basic commodities to support our active military troops, and new to our list of philanthropy endeavors is to support those who have been victims of human trafficking,” said Melinda Robbins, MBA President of the Chino Rotary Club. “We will meet this aggressive goal by starting our fundraising efforts with our 2017 Annual Dinner & Auction,” she concluded.

The Dinner and Auction’s theme is “The Heart of Chino – A Legacy of Service” which truly denotes the local club’s mission to give and serve. This event will be held on Thursday February 23, 2017 at the Los Serranos Country Club in Chino Hills from 6-9pm. Tickets for this event cost $35 per person and can be purchased online through Eventbrite.com under Dinner/Auction Fundraiser or purchased at the Chino Champion Office located at 13179 9th Street in Chino. Everyone is welcomed to attend this fun-filled Dinner and Auction Fundraiser.

The Chino Rotary Club is also seeking event sponsors and accepting items for the Silent and Live Auctions. “We seek the help of community sponsors to partner with our Club at various monetary levels to help us make a significant and sustainable difference in our community and together leave a lasting impact,” said Zeb Welborn President-elect of the Chino Rotary Club.

Let Zeb know if you plan on attending, send an email to Zeb@WelbornMedia.com.

The owner of Welborn Social Media and the founder of The Tutoring Solution.My goal is to help business owners share the passion they have for their business with as many potential customers as possible.By helping passionate people achieve their dreams I am helping to create a society of passionate leaders that will help inspire others to make their dreams a reality. 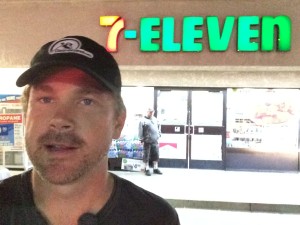 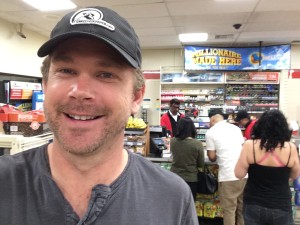 Growing up in Chino Hills since 1981, I’ve seen the city grow from a cow pasteur to a robust suburban town. I’ve personally witnessed a tremendous amount of growth in both Chino and Chino Hills in my lifetime. As the Chairman of the Board for the Chino Valley Chamber of Commerce I can see that that success and prosperity will continue.

One of the coolest things that happened as a result of the Powerball win is how it showcased the way our city came together to support something that put our city in the spotlight for at least a few days.

As a child, I’d try to convince my parents to let me ride my bike to the 7-Eleven so I could get some snacks or a Slurpee. I grew up within a bike rides distance of the place that sold a winning ticket to the largest-ever lottery prize.  And that’s pretty cool.

The first time I played the lottery was last Saturday, where I bought one ticket for what was then the largest lottery purse in history at $900 million.  On Wednesday, I bought my second for the $1.5 billion jackpot.

In addition, the President of our Sunday Bowling League, Doug, organized a lottery pool and purchased tickets on behalf of our bowling league.

I didn’t watch the lottery live, but I got messages from family and friends not long after telling me to check my tickets. They had heard the news that a winner was sold in Chino Hills.

I carefully checked my ticket.  I didn’t match a single number. Unfortunately, I bought it at the Circle K gas station across the street from that 7-Eleven.

Then I remembered I still had a chance with Doug.

My family (who also bought into the bowling pool) and I, waited by the phone hoping Doug would call to tell us the good news, or the more likely scenario, the bad news.  But, we didn’t hear from Doug, and so wild speculation began.

As time wore on, it became more and more likely in our minds that we would be declared the winners for various reasons:

On Sunday, we headed to bowling as we do every Sunday night, only this time we were on the lookout for big news vans and television crews, there to catch our excitement as Doug announced that we were indeed the Powerball winners.

As we entered the bowling alley, Doug, a plumber, was outside making a phone call where he was talking about water heaters and other things a plumber would discuss, clearly a ruse.

Finally, Doug ended his phone call and came inside just before bowling began. I asked him one simple question:

“So Doug, are we millionaires?”

He reached into his pocket and threw down lottery tickets paper-clipped together and said, “You have no idea how hard this week has been. We didn’t win.”

As it turns out, Doug did buy our tickets at the 7-Eleven in Chino Hills as we had suspected, but not the winning ticket. As of now, we didn’t win the Powerball . . . Honestly, we’re still hoping Doug is holding out on us waiting for a more opportune time to tell us that we’re all millionaires.